The SLOCDP Condemns President Trump for Demeaning the U.S. Military, and Challenges the Republican Party 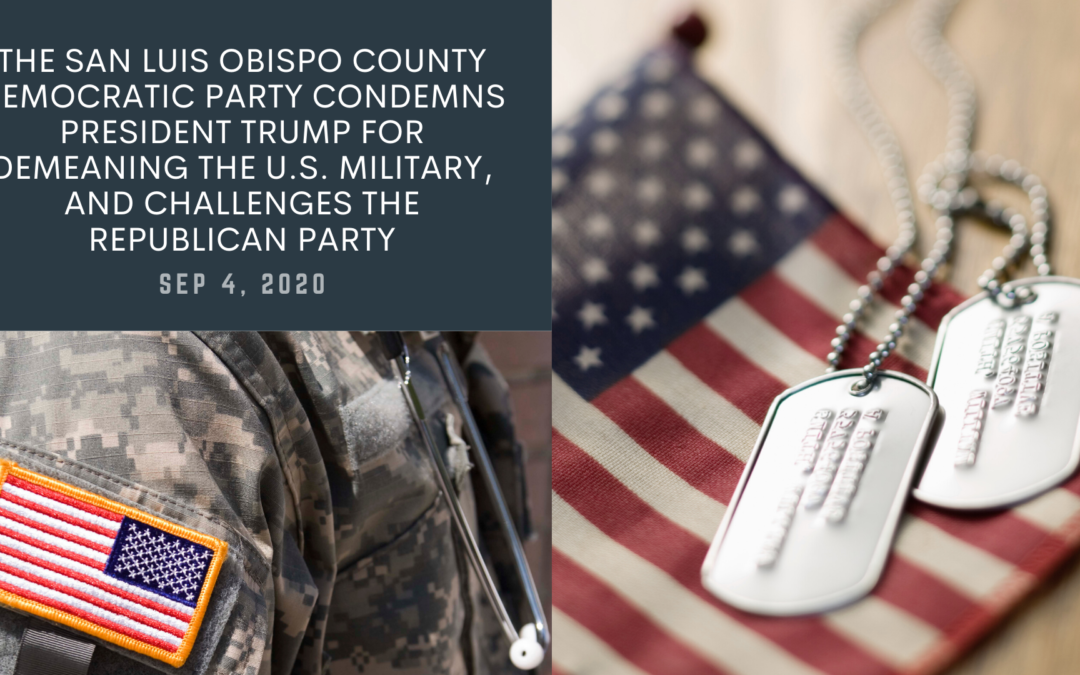 The San Luis Obispo County Democratic Party (SLOCDP) condemns President Trump for his un-American statements in which he demeans the U.S. military, calling the Marines who died defending our country “suckers”, and belittling former Arizona Senator John McCain — who served heroically in the Vietnam War — as a “loser.” Further, SLOCDP calls on the Republican Party and California State Assemblyman Jordan Cunningham (AD-35) to explain Donald Trump’s aberrant statements, and their support for him.

Our Democratic Congressman Salud Carbajal (CA-24) — who served eight years in the United States Marine Corps Reserve, including active duty service during the Gulf War in 1992 — rebukes Trump, saying, “As a veteran, I am appalled that our Commander-in-Chief could treat our service members with such contempt. The men and women who serve our country in uniform, and especially those who made the ultimate sacrifice, are not losers; they are heroes … The President only serves his own interests. Our veterans deserve a Commander-in-Chief who treats them with respect and values their service and sacrifice, not one who disparages them.”

Adding his voice to the majority of Americans that takes offense at Trump’s callous and divisive statements, Pete Buttigieg — an Afghanistan War veteran and former 2020 Presidential candidate — says, “These comments are part of Donald Trump’s pattern of disrespect for the military, ever since he faked an injury to get out of serving in Vietnam.”