SLOCDP Resolution: Urgent call for President Donald Trump to be removed immediately and legally from office 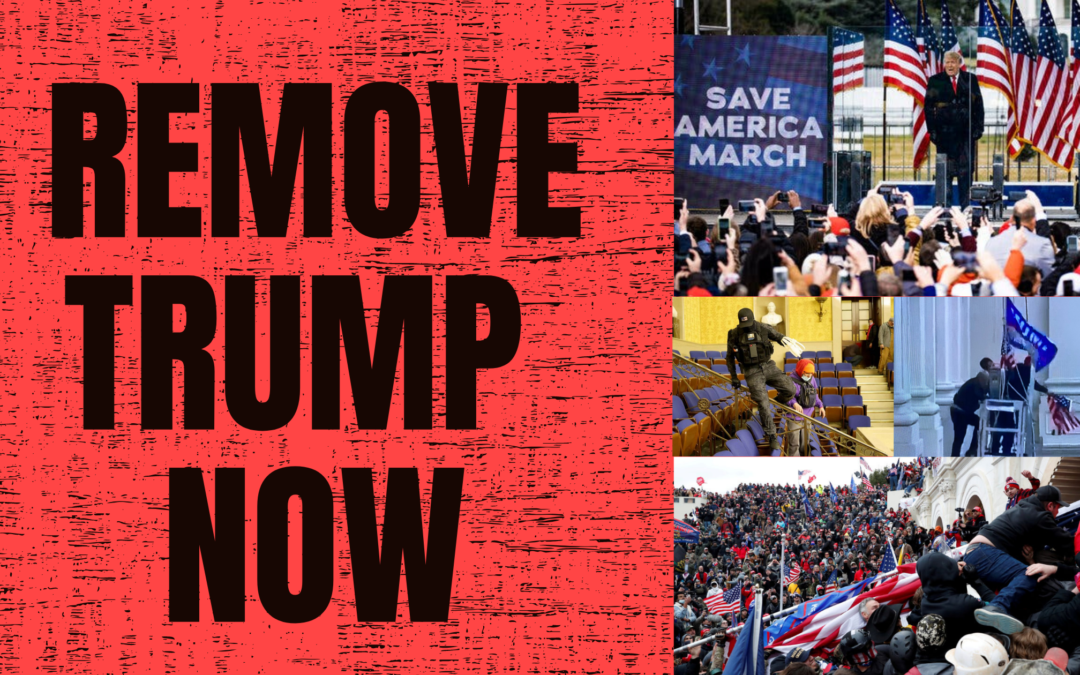 San Luis Obispo CA — San Luis Obispo County Democrats are asking their neighbors and local officials who have supported President Donald Trump in the past to condemn his central role in the deadly assault on our nation’s Capitol last week and publicly demand that he resign from office immediately.

“Despite our many differences in the past, thoughtful Republicans and Democrats here on the Central Coast — and especially our local elected officials who vow to defend our Constitution — should be able to agree that Donald Trump should resign and never again hold the office of President of the United States,” said Rita Casaverde, Chair of the San Luis Obispo County Democratic Party (SLOCDP). “There are no excuses for this,” she emphasized. “Regardless of our political party affiliations — for the good of our country and our county — we invite everyone to join us in demanding that Trump put our nation’s interests above his own and resign.”

“Unfortunately, Trump will probably put his ego first and refuse to resign,” Casaverde predicted, “in which case Vice President Pence and his administration’s Cabinet must invoke the provisions of our Constitution’s 25th Amendment to remove Trump from office.” The SLOCDP Chair is confident that if the Vice President fails to take appropriate action, the U.S. House of Representatives will move to impeach Trump, again, within the next several days, making Donald Trump the first president in the United States history to be impeached twice.

“It’s natural that our eyes and hearts are focused on Washington D.C.,” Casaverde said, “but we cannot afford to be blind and unconcerned about what is happening right here and right now in our own communities.” For example, Casaverde forcefully denounced Randall Jordan, chairman of the Republican Party of San Luis Obispo County, for his statement that, “Hopefully we will see [Trump] in four more years.” Casaverde said, “Our country needs the Republican Party to resume its role of a loyal opposition, to recognize Trump’s crimes, and the consequences of his rhetoric using ‘alternative facts’. Five Americans died in our Capitol, police officers were beaten with American flags, attackers wore clothing with Nazi symbols, the American flag was replaced with a Trump flag, and a confederate flag was waved inside the Capitol, which didn’t happen even in our Civil War. If this is not the time when the Republican party comes to its senses, when is it?”

The SLOCDP at its January 11, 2021 meeting unanimously adopted a resolution demanding that President Donald Trump be removed immediately and legally from office for treason and high crimes, and for local San Luis Obispo County officials — particularly those that rely on the Republican party’s support to win office — to join SLOCDP in its efforts to protect and defend the United States of America by condemning and repudiating Trump’s aberrant, unconstitutional and criminal acts. For the full text of the resolution, go to slocdp.org.

“Silence at this critically important time is not a virtue,” remarked the SLOCDP Corresponding Secretary John Alan Connerley. “History will condemn Trump, as well as those who fail to repudiate him.”

An urgent call for President Donald Trump to be removed immediately and legally from office for treason and high crimes, and for local San Luis Obispo County officials — especially those that rely on the Republican party’s support to win office — to join us in our efforts to protect and defend the United States of America by condemning and repudiating Trump’s aberrant, unconstitutional and criminal acts

WHEREAS the democratic republic of the United States of America is founded on the principles of rule-of-law, values which are enshrined in our Constitution and in our democratic traditions in order to promote Liberty, Justice and security for all; and

WHEREAS the two-party political system engendered by our Constitution requires that the leaders and members of both parties — the Democratic and Republican political parties — remain steadfast in their commitment to rule-of-law in both words and deeds; and

WHEREAS the deadly, premeditated, criminal attack on our nation’s Capitol in Washington D.C. on January 6, 2021, by radicalized extreme individuals and organizations was a stark violation of rule-of-law and our Constitution; and

WHEREAS the San Luis Obispo County Democratic Party stands against the white supremacy, neo-Nazi groups that led the attack on the Capitol, and the use of the confederate flag and all other anti-American insurrectionist hate symbols; and

WHEREAS the heinous assault on our Capitol and our Constitution was encouraged, abetted and endorsed by Donald Trump, the current President of the United States, as well as by many of his administration’s officials and leaders of the Republican Party; and

WHEREAS Trump violated his oath to defend the United States and our Constitution because he incited his most extreme followers to violence by repeatedly lying about the validity and legitimacy of the U.S. General Election of November 3, 2020, a democratic exercise in which the citizens of the United States clearly elected Joe Biden as their President and Kamala Harris as their Vice President by a decisive majority of the national popular vote and an even wider margin in the Electoral College; and

WHEREAS Trump attempted to intervene and subvert the U.S. General Election of November 3, 2020 in the State of Georgia by asking its Republican secretary of state to cheat and lie, to “find” enough votes in order for Trump to “win” the state’s Electoral College votes; and

WHEREAS President Trump’s deliberate actions and words amount to treason and high crimes because they seriously harm our country and intentionally assist our foreign adversaries in their goals to sow discord among us and to destabilize our Constitutional system;

NOW, THEREFORE, BE IT RESOLVED that the San Luis Obispo California Democratic Party calls on Donald Trump to immediately resign as our nation’s 45th President because he is unfit and has violated his oath to protect the United States and our Constitution; and

BE IT FURTHER RESOLVED that if Trump obstinately refuses to resign, Vice President Pence and the Trump administration’s Cabinet must immediately invoke the provisions of our Constitution’s 25th Amendment in order to remove Donald Trump from office; and

BE IT FURTHER RESOLVED that if Vice President Pence and the members of his  administration’s Cabinet shirk their duty to invoke the provisions of our Constitution’s 25th Amendment, the U.S. House of Representatives must immediately impeach Trump and the U.S. Senate must remove him from office for treason and high crimes; and

BE IT FURTHER RESOLVED that the San Luis Obispo County Republican Party — as well as its members and the local elected officials who seek and enjoy its support — must put Country above Party, publicly condemn the perpetrators and the individuals  and the organizations that planned, encouraged, executed and continue to condone the destructive, deadly and treasonous attack on our nation’s Capitol in Washington D.C. on January 6, 2021, and join us in demanding that President Trump either resign, the Cabinet remove him from office per the provisions of our Constitution’s 25th Amendment, or that the U.S. House of Representatives immediately impeach Trump and the U.S. Senate remove him from office